THE MICROBIOME: CONNECTING YOUR GUT AND SKIN

Writer and expert / Posted on

Did you know that there are countless single-cell organisms living on and throughout the human body? While it sounds a bit alarming, much of these microbial communities are made up of good bacteria that are an essential component of human physiology—both in health and in disease. Thanks in large part to the human microbiome project which began in 2007, we now know that these ecosystems can have a significant impact not only on the human gut but also on the immune system, skin, behaviour and more.

What does it have to do with your skin health, your well-being and the products you are using?

Our Skin Advisory Board member, Dr. Katlein França takes you through some of the clinical facts about the microbiome – the living and ever-changing protective layer of your skin.

WHAT IS THE MICROBIOME?

A microbiome is a community of microorganisms and their genes living in or on the human body, such as bacteria, fungi, or viruses.

Microbiota refers to microorganisms (by type) living in a specific environment. 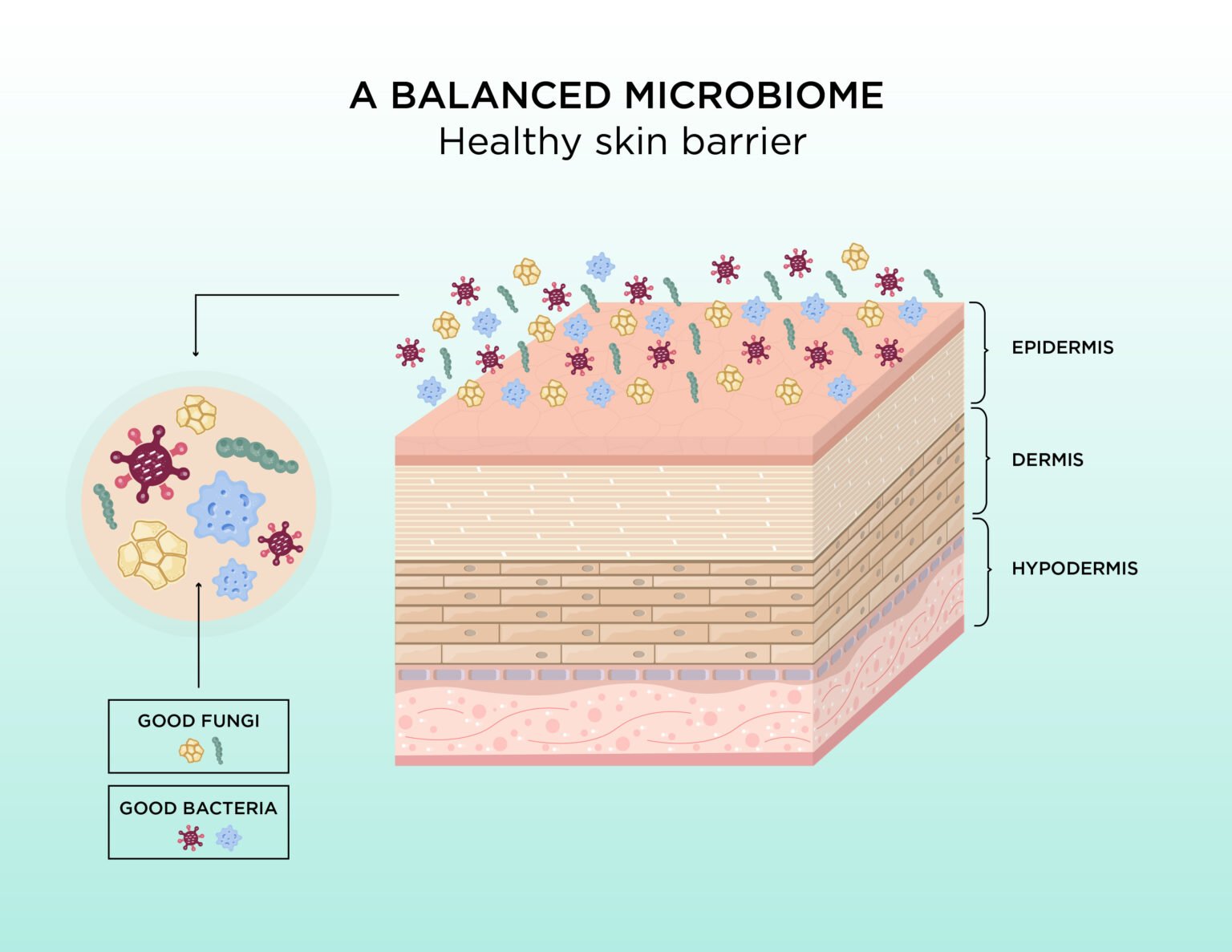 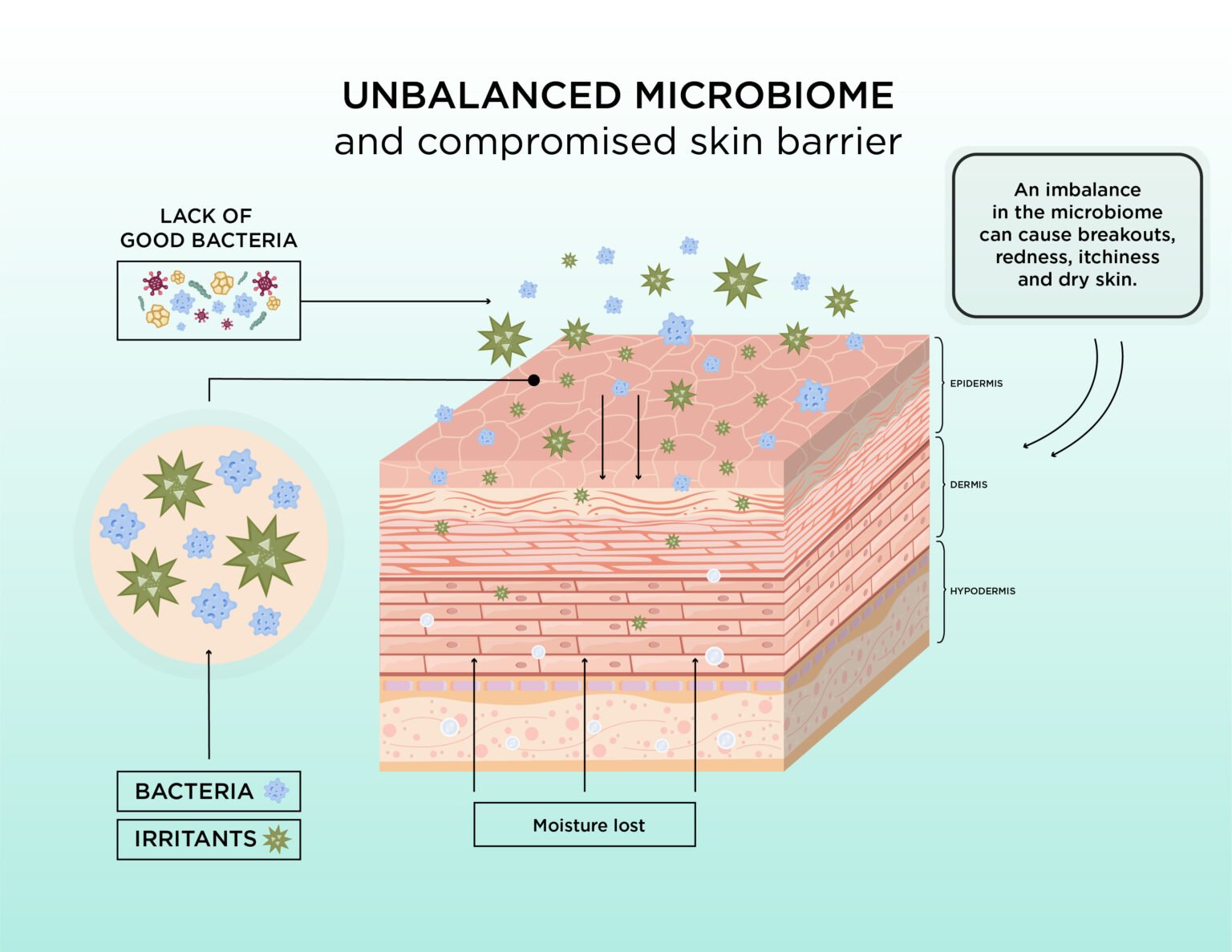 HOW TO IMPROVE THE GUT MICROBIOME?

Your gut microbiome can be modulated and improved mainly by these four factors:

Diet plays a significant role in shaping the microbiome, and experiments show that dietary alterations can induce significant and temporary microbial shifts within 24 hours¹. Examples of foods that are beneficial to gut microbiome include artichokes, leeks, onions, and garlic, which all contain high levels of prebiotic fibres and unsweetened yoghurt; kefir, raw milk, cheeses; and soybean-based products such as soy sauce, among others. Improve your gut microbiome by reading these food myths.

In the past decade, research on the gut microbiome has rapidly progressed and has been marked by increased interest in probiotics and prebiotics as means to modulate the gut microbiota².

Probiotics are the live microorganisms such as bacteria and yeasts that confer a health benefit on the host. They can restore and change the composition of the gut microbiome, resulting in the improvement or prevention of gut inflammation and other intestinal or systemic diseases³.

Prebiotics are non-living, non-digestible by human ingredients that serve as food for the bacteria living within the gut.

Recent studies suggest that exercise can enhance the number of beneficial microbial species, enriching the microflora diversity, and improving the development of commensal bacteria.

Microbiota is responsive to the homeostatic and physiological variations due to exercise⁴ ⁵.

Meditation is gaining popularity in clinical settings, and its treatment efficacy is being studied for a wide array of not only psychological but physiological ailments as well.

A study performed by Bermon et al. investigated the Effects of Stress and Meditation on the Human Microbiota, and the authors found that meditation regulates the stress response, suppresses chronic inflammation, and maintains a healthy gut-barrier function⁶.

ARE MICROBES THE SAME IN THE GUT AS ON THE SKIN?

The gut and skin microbiota are made up of trillions of microbes, derived from thousands of different strains, that live together like an intricate ecological community⁷.

Different parts of the body, such as skin and gut, contain diverse species and various proportions of the same species. The bacterial inhabitants of the human gastrointestinal tract constitute a complex ecosystem. The four dominant bacterial phyla in the human gut and in the skin are Firmicutes, Bacteroidetes, Actinobacteria, and Proteobacteria⁸ ⁹. 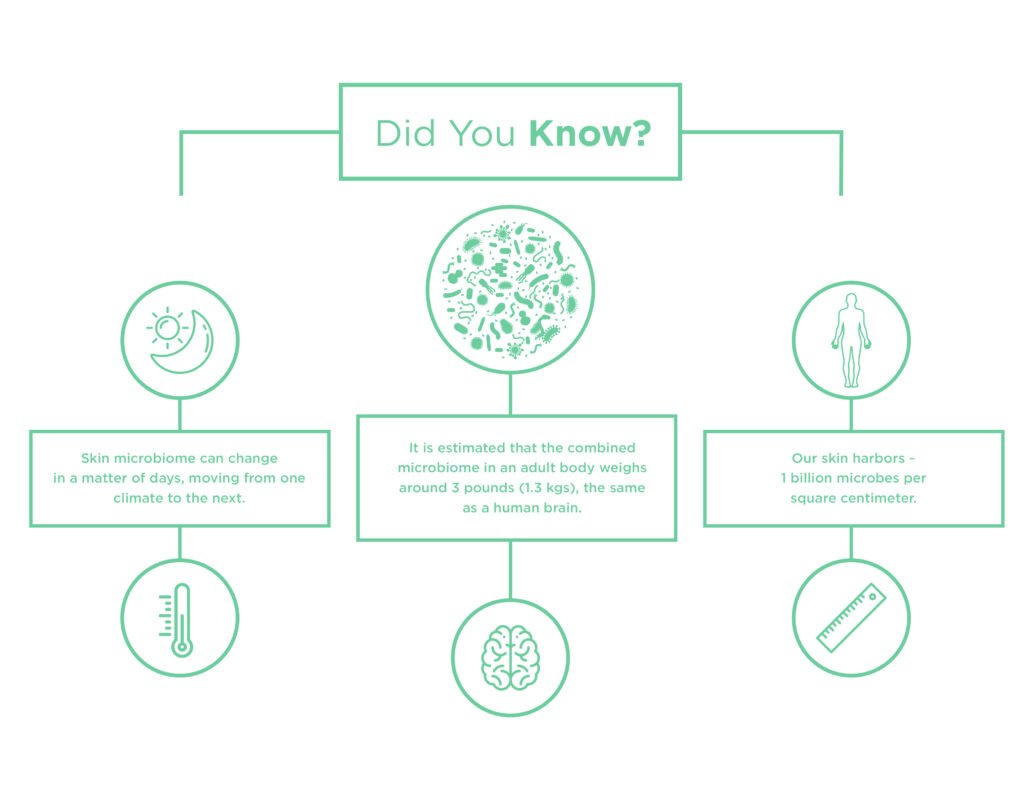 HOW MICROBIOTA BENEFIT THE BODY AND SKIN?

The gut microbiota affects all aspects of human health; however, scientific evidence, the mechanisms of action, models and technologies vary considerably from one benefit area to the other.

The gut microbiota has important roles with regards to anxiety, mood, cognition and pain which is exerted via the gut-brain axis as well as important metabolic and immune benefits. Prebiotics and probiotics have been used to regulate the microbiota and to treat a range of conditions including bowel diseases and allergic reactions and also have been used to prevent diseases such as acute respiratory tract infections and antibiotic-associated diarrhoea¹¹ ¹².

The beneficial effects of gut bacteria on skin health have been explored in several studies. Probiotics and prebiotics have shown positive effects on the prevention and/or treatment of skin diseases such as acne, atopic dermatitis, and psoriasis¹³.

Our Prebiotic collection focuses on the balance of your microbiome. Learn more about them:

WHAT ARE FREE RADICALS AND HOW DO THEY DAMAGE YOUR SKIN?

WHAT IS CLEAN BEAUTY? INGREDIENTS TO AVOID IN SKINCARE

HYDROQUINONE: ALL YOU NEED TO KNOW ABOUT THIS INGREDIENT

WHAT IS THD ASCORBATE AND WHY IS IT GOOD FOR YOUR SKIN?

CBD VS HEMP SEED OIL IN THE BEAUTY WORLD

VALENTINE’S DAY BEAUTY GIFT: IDEAS FOR HER AND FOR HIM

HOW STRESS AND ANXIETY AFFECT YOUR SKIN