HYDROQUINONE: ALL YOU NEED TO KNOW ABOUT THIS INGREDIENT

Writer and expert / Posted on

From brightening serums to questionable-sounding bleaching creams, the skincare world is full of products promising safe, topical skin lightening. The justifications for such products often and easily veer into problematic territory—but mostly, they’re intended to help correct specific hyperpigmentation issues like age spots, sun spots, acne marks, or else offer a boost in clarity to dull skin. Dark spots are a common skincare issue, and though bothersome, they don’t usually cause significant stress. However, those affected by more serious pigmentation disorders like melasma, post-inflammatory hyperpigmentation (PIH), or severe acne scarring often find their quality of life suffers as a result.

For almost 60 years, Hydroquinone has been promoted as a solution for dark spots. Its efficacy is proven, and to this day, it remains the most frequently-used lightening agent in skincare. However, potentially serious side effects and safety concerns—and reports of adverse reactions from overuse or misuse of Hydroquinone have led to increased regulation, and even a ban in the EU, Japan, and Australia. In the US, 2% Hydroquinone is available over the counter: but does this mean you should be using it? In this article, we go over some Hydroquinone basics—including its uses, potential side effects, and possible alternatives.

WHAT IS HYDROQUINONE, AND WHAT IS IT USED FOR?

Hydroquinone is among the most commonly used topical agents used to correct brown spots, PIH, melasma, or in some cases, for cosmetic skin bleaching. In certain Asian and African markets, Hydroquinone is used for general skin lightening, where fair skin is widely regarded as being more desirable. For people suffering from moderate to severe melasma—where they experience persistent darkening of the forehead, cheek, or upper-lip area, Hydroquinone has been shown to offer effective lightening benefits, significantly improving patients’ quality of life and self-esteem.

HOW DOES HYDROQUINONE WORK?

Hydroquinone’s lightening ability was first reported in 1936, when a German doctor noticed that black-haired cats became lighter after ingesting it. In the 1950s, Hydroquinone was incorporated in sunscreens in the US, and users reported skin lightening as a side-effect. Essentially, Hydroquinone works by inhibiting the production of melanocytes, the cells that produce melanin—i.e. the natural pigment responsible for skin and hair colour. It does this by suppressing tyrosinase, the enzyme that’s required to produce melanin.

WHAT SKIN CONDITIONS CAN BENEFIT FROM HYDROQUINONE?

Hydroquinone is often used to treat a number of skin discolouration disorders. It can be used to treat more everyday skin concerns like age spots, dark spots from sun exposure, acne scarring, or scarring caused by eczema or psoriasis. Often, and especially at concentrations over 2%, it’s used to treat more serious conditions like melasma—a chronic skin disorder involving excessive melanin production in response to UV exposure, heat, or even hormones from pregnancy (though note that Hydroquinone is not recommended for pregnant or lactating women). For people with multiple sun spots (also known as liver spots, or lentigines), 4 to 6% Hydroquinone is often prescribed to help correct skin tone. Daily sun protection in the form of a broad-spectrum sunscreen is essential for anyone using topical Hydroquinone. 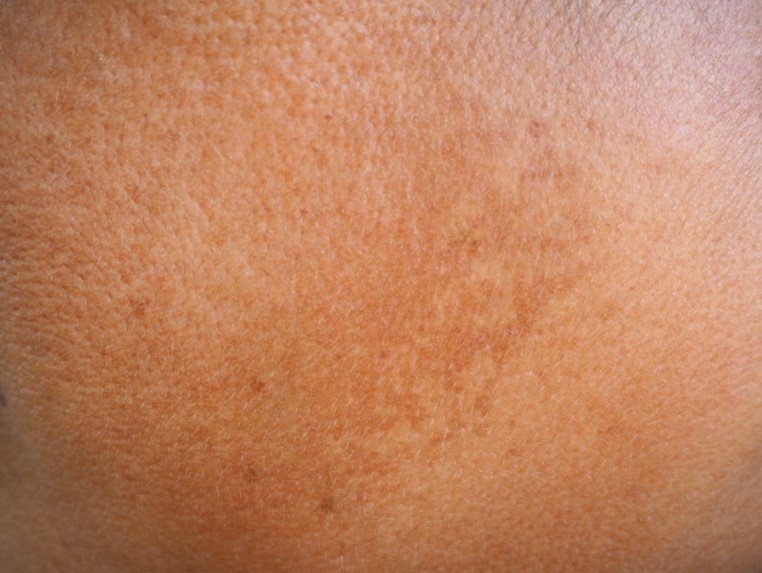 SIDE EFFECTS AND PRECAUTIONS

Skin irritation is one of the most commonly reported side effects of using topical Hydroquinone. It’s been reported that up to 70% of people using Hydroquinone may experience redness, peeling, or dry skin. As with any new skincare product, it’s always a good idea to perform a patch test on a small area of skin before using it on a larger area. You can do this somewhere relatively inconspicuous—behind your ear or your neck—by applying a small amount at night for a week and waiting to see if you have any significant reaction. Once you’ve properly vetted your Hydroquinone-based treatment, it’s best to apply it sparingly, and only to areas of discolouration. Unless instructed otherwise by your dermatologist, it’s typically recommended that you follow up with a gentle moisturiser. If you develop any mild redness or signs of irritation, you can try decreasing your application frequency to every two or three nights (though sure to keep applying moisturiser every day). If this doesn’t help, you should of course stop using the product and see your dermatologist.

A word on using Hydroquinone to treat acne scarring: if acne is an issue for you, it’s important not to mix products containing Hydroquinone with those containing peroxide, including Benzoyl Peroxide (a common acne treatment). Used together, they can actually end up staining your skin, though this is usually temporary. In some very serious cases, Hydroquinone can cause something called exogenous ochronosis, i.e. permanent hyperpigmentation. This is why you generally need close dermatologist supervision when using high-dose Hydroquinone products, though it must be noted that exogenous ochronosis has been reported in patients using lower doses (under 3%) as well. As mentioned above, though melasma is a common problem during pregnancy, Hydroquinone is not recommended for women who are pregnant or lactating due to its uncertain safety profile.

ARE THERE OTHER ALTERNATIVES TO HYDROQUINONE?

The increased scrutiny on the potential side effects of Hydroquinone, as well as its banning in Europe, Japan, and Australia have helped fuel the cosmetic industry’s interest in finding safer alternatives. (That said, be wary of labels making claims around ‘clean beauty’ as this is not a strictly regulated term—and one that’s often defined differently from brand to brand.)

Some proposed alternatives to Hydroquinone include:

Many of these, like Azelaic acid and Niacinamide, work similarly to Hydroquinone, inhibiting tyrosinase or helping suppress melanin production. 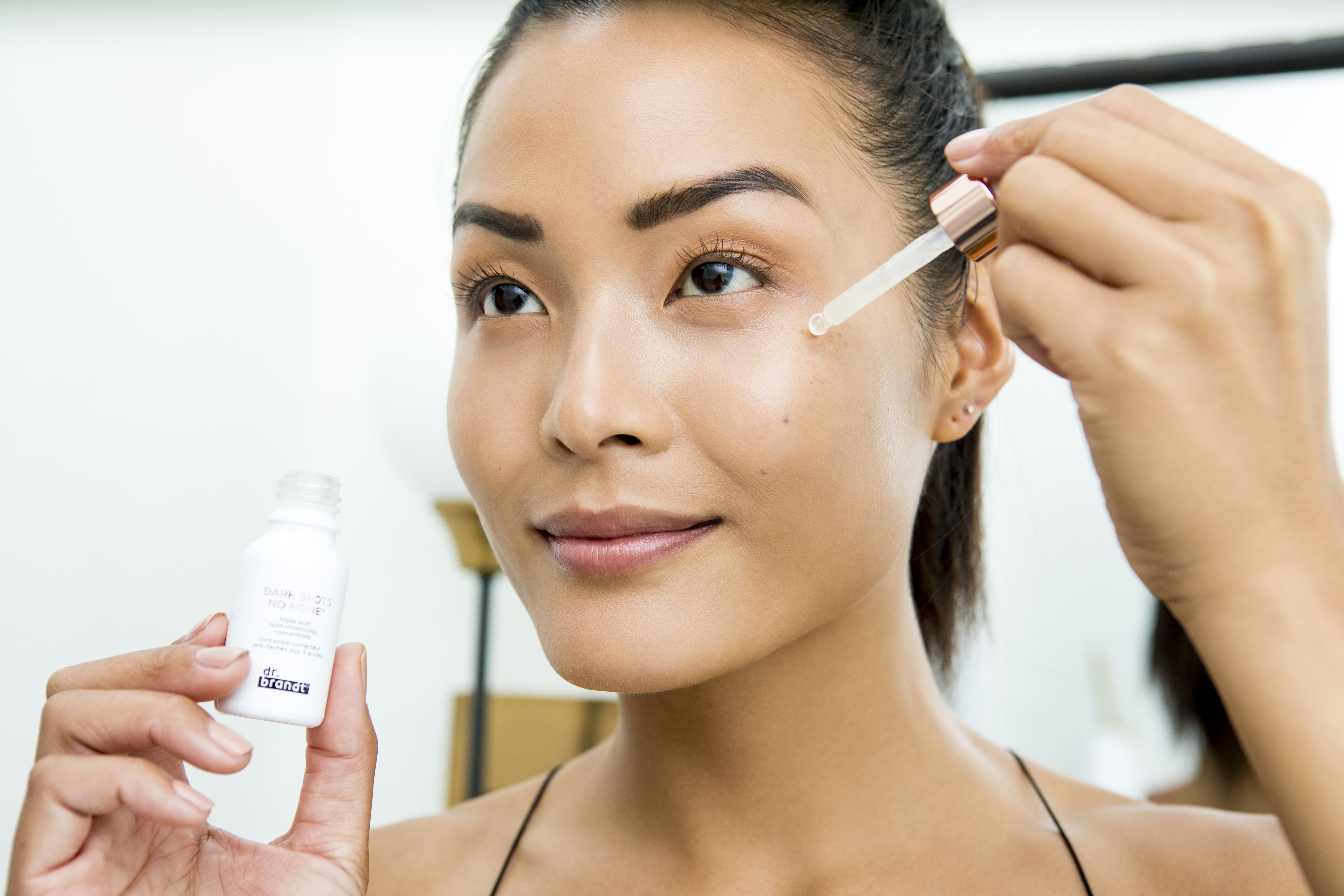 Another alternative to using agents that directly target melanin synthesis and transfer is to use products that promote cellular turnover—which is simply a more scientific way of saying: exfoliate. Exfoliation, whether physical (micro-grains), chemical (AHAs, Lactic acid), or a combination of both sweeps away dead skin cells, providing an overall brightening effect.

WHAT ARE THE BEST SKINCARE TIPS FROM AROUND THE WORLD?

WHAT BLUE LIGHT IS DOING TO YOUR EYES, SLEEP, AND SKIN

WHAT IS CLEAN BEAUTY? INGREDIENTS TO AVOID IN SKINCARE

WHAT ARE THE REAL BENEFITS OF VITAMIN C?

HOW TO GET CLEAR SKIN: 15 TIPS FOR GLOWING SKIN